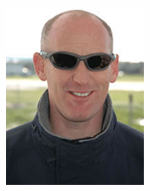 I did my first skydive at langar parachute centre and spent two years as a club member before leaving to join the parachute regiment. I spent five years on the Red Devils Freefall Team taking part in parachute displays around the world. I then left to join GQ Parachutes as a project engineer designing and testing parachutes.

After three years working for GQ Parachutes, I left to set up my own company called Sky Science to sell and service parachute equipment. The company then moved into manufacturing custom parachute equipment and organising skydiving stunts for the TV & Film industry.

As a BPA Examiner I spent five years as chairman of the BPA Riggers Committee and member of the Safety And Training Committee. During this period I spent thousands of hours working on varies BPA projects to develop training systems and improve safety within the sport.

After selling part of Sky Science I moved from the UK to open a parachute centre in Spain. I set up and managed Skydive Spain for a period of seven years before selling the company. I am currently running my Sky Science company which has now been refined to concentrate on those aspects of the sport that interest me the most; coordinating skydiving stunts and teaching.

In my career I have earnt the following qualifications issued by three different parachute associations: